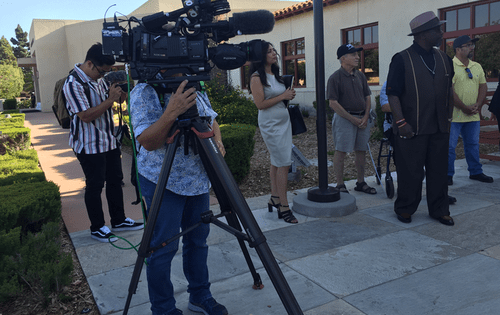 FROM THE TRENCHES: TWO RESPONSES TO THE DRAG QUEEN STORY HOUR IN CHULA VISTA, CALIF.

I arrived at a scheduled prayer event at Chula Vista City Hall a little late—parking was tight. This prayer meeting was in response to a Drag Queen Story Hour occurring across the street. Previously, a national group, Mass Resistance, held a press conference and a rally against the story time that had become antagonistic. Instead, this scheduled prayer time, led by local Christian leader Bishop Art Hodges, provided another alternative.

To reach City Hall from my car, I moved through a confrontation at the Chula Vista Main Library. The Story Hour was already under way. About 100 people stood in support, many sporting colors of the rainbow on clothing, capes and umbrellas. A man with a bullhorn led them in shouting and chanting. They waved signs promoting “Imagination,” “Love,” “Inclusivity” and “Equality.”

Opposing them, and more subdued, protesters—maybe 60 people—held signs condemning the affair as anti-Christian and unfit for children. Barriers separated the two factions with a heavy police presence in-between. Media cameras and reporters worked both sides of the crowd. It seemed an emotionally-charged, mob atmosphere.

Reaching the steps of City Hall, about 50 people stood quietly in prayer led by Bishop Hodges. He had previously scheduled appointments with city leaders to discuss why many of faith in Chula Vista opposed men dressed as drag queens reading to children on public, taxpayer-supported property. He then held his own press conference along with other pastors. The Bishop’s attempts to build relationships led to a City Council member standing alongside in agreement.

Those praying with Bishop Hodges included his Executive Pastor, Amado Huizar, whose building, “South Bay United Pentecostal Church, had been defaced over the weekend with hate slogans. The Bishop announced times of prayer would continue on a regular basis when the City Council was in session. As he described it, “This is a prayer event, not a protest.” A website is planned encouraging believers to “Step Up 2 Pray.”

As Christians, we are enjoined to first approach the Lord to gain His plan, purpose and perspective. This does not mean we only pray – it means begin the process with prayer, and continue to seek the Lord throughout. The goal is to protect children’s innocence, the stakes high. Bishop Hodges had followed prayer with redemptive action. His is a blueprint Christians can adopt nationwide:

The Bible tells us the unsaved cannot see the Kingdom of God, and the redeemed are to be salt and light. The combination of salt and light means we speak truth, but concurrently shine the light of God’s plan of salvation. In fact, many who identify as “transsexual” or “gay” eventually find freedom through faith in Jesus Christ.  Changed: Once-Gay Stories, is a book containing these true-life testimonies. I took a copy with me to the City Council meeting hoping to read a couple of excerpts. The atmosphere seemed too charged, so I left it for another time.

Outside, there was an exchange of harsh words between two groups of women. I approached those opposed to the story hour and tried to show them the testimonials. They were not moved, although they identified as Christians. They only saw through the lens of their own anger.

Is there a place for standing with signs condemning Biblical sin? Certainly, we need to make our voices heard. I have attended rallies in front of the Board of Education and school board meetings saying we must not use classrooms to sexualize children.

However, we must take our own advice and use Biblical strategies, going first to God and then using His weapons of warfare. The Bible admonishes that to truly change minds, we need to change hearts. 2 Corinthians 10:3-6 gives a pattern for how to engage. It is not a carnal affair. We fight principalities in high places with spiritual weapons, all the while contending for those living in a world deceived by sin.

The Good News takes into account both Covenants, the Old and the New. Jesus came to fulfill the Law, not abolish it, but now we have God’s promise that offers freedom:

Therefore, there is now no condemnation [no guilty verdict, no punishment] for those who are in Christ Jesus [who believe in Him as personal Lord and Savior]. For the law of the Spirit of life [which is] in Christ Jesus [the law of our new being] has set you free from the law of sin and of death (Romans 8:1,2 [AMP]).

Proclaiming the full Gospel message is the path Bishop Hodges has chosen. If we neglect doing so, we risk losing not only the battle, but also the war.