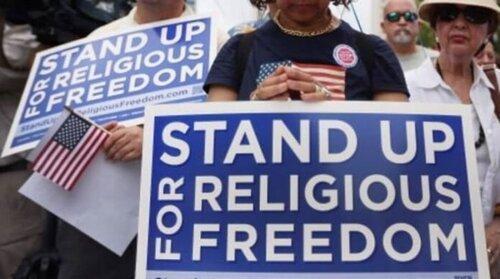 HOW TO STOP THE EQUALITY ACT AND OTHER EGREGIOUS LEGISLATION

HR 5 was passed by the U.S. House of Representatives on May 17, 2019. It is up to the U.S. Senate to now deliberate on its possible passage. The bill prohibits discrimination “based on sex, sexual orientation, and gender identity in a wide variety of areas including public accommodations and facilities, education, federal funding, employment, housing, credit, and the jury system.” https://www.congress.gov/bill/116th-congress/house-bill/5

A simple analysis shows the immediate goal of HR5 would give sodomy national protection and legitimization.  It would, concurrently, delegitimize the Judeo-Christian ethic that calls such behavior a sin. The First Amendment would cease to guarantee freedom of speech. Instead, a punitive system of law would silence dissent with very real consequences. This currently affects a handful of cases involving bakers, florists and such, who for religious reasons, decline to employ their craft for same-sex “marriages.”  In sum, the Johnson Amendment would pale in comparison to HR 5 for the length and breadth of stifled speech and behavior.

The very possibility of an HR 5 shows the decay and fraying of American culture. In May, 2014, those skeptical of the Bible doubled in just three years, and in 2009, only nine percent of Americans still held a Biblical worldview, according to Barna Group studies. Our children, by age 17, have spent only 800 hours in church, 2,000 hours with parents, but 11,000 hours in school and 40,000 hours with some form of media.

To arrest the passage of the Equality Act, Christians first need to recall God’s original design. For The Salt & Light Council (SLC), Matthew 5:13-14, 1 Timothy 2:1-4, and 2 Chronicles 7:14 frame the original blueprint for humanity. Basically, those born again through confession and belief in the sacrificial atonement of Jesus Christ form His body. In any given generation, the called are commissioned by God as salt and light–we are to be God’s ambassadors and lead others to faith.

Through our own salvation, we model Christ-centered obedience not legalistically, but humbly and ably, through lives transformed from hearts transformed as God’s Spirit within us directs our steps. We gain the living, breathing fellowship of God who, while being our loving Father, is also a King: and He is holy.

A holy God gave His Son, Jesus Christ, all authority over Heaven and earth. This is governmental authority, and His body, the Church, is to exercise it. The Church in America, however, has shrunk back from involvement. We have given over “politics”–which simply means the exercise of authority over a land–and allowed corruption and evil forces to replace our inherited position.

We need to first take back what the enemy has stolen, and then to regain at least an equal footing; this is America, not a theocracy.  However, the concept of separation of Church and state is not in the Constitution as an amendment. It has also been misapplied. The state is meant to stay out of the Church, not the other way around. Christians should, and must, exercise the freedom of religion; it is that First Amendment, in fact, that now lies in jeopardy like shark bait.

Dran Reese, Salt and Light Founder and President, says, “We need to scrub people’s heads clean of secular thinking and bring them back to the Bible.” To counter the secular drain of Judeo-Christian freedoms, SLC trains and equips Affiliate Leaders to head civic-serve, Biblical citizenship ministries within their churches and organizations with the approval of their pastors/organizational leaders, just like any other ministry.

These leaders get involved for various reasons. For Heidi Pezdek, from Greensburg Indiana, the motivation was clear: “As our children got older, we could see the world they were going to live in was going to be different than the world we lived in. We were seeing our Christian values trampled on; we had to fight for them.“

Jannai and John Pero saw an unmet need. “We learned half of Christians aren’t registered to vote and half of those registered don’t vote. We already knew not all voted with wisdom, and began praying ‘how to reach the Church.’” The couple heard about The Salt & Light Council and were soon involved in training. “We call ourselves ‘political missionaries,’” Jannai declares.  “This was our answer to prayer that we’ve been promoting ever since.”

Our nation is in dire trouble, but through humility, prayer and repentance, we can see restoration. The Church on earth today is His body–His hands, His feet and His voice. Together, we can accomplish what none of us can do alone. We can stop the “H.R. 5s”–it is proven that when Christians show up, we win the battle. We just have to show up.

–          Education: Congregants must be re-educated in what the Bible says about God’s non-negotiable issues including life, marriage and sexuality. We must live the full Gospel, not legalistically, but with hearts of God’s love and truth so genuine repentance proceeds to changed lives.

–          Mobilization: Christians living as a body of believers moving in the same direction with like-minded goals.

–          Activation: Christians become salt and light in all areas of life, including government, education and media. Modeling and discipling. Until the Church has more influence over culture than culture has over the Church, egregious bills like HR 5 will continue to mow us down. Jesus says in Matthew 5 that salt that has lost its saltiness is good for nothing but to be trampled on.

–          Start a civic-serve, Biblical Citizenship Ministry, in your church. Assign one person to lead it, just like any other ministry in the church. Training is three hours, online. Your leader will be certified and have access to our members-only portal of tools and resources and continuing back-office support. Get started: Gail@saltandlightcouncil.org; https://saltandlightcouncil.org/start-a-slc-ministry-2019

–          Contact your U.S. Senators to oppose or support legislation. SLC provides a Monthly Maintenance newsletter complete with Scripture, Prayers and Actions on bills such as H.R. 5 on our exclusive Members Page portal (an emailable version is also made available).

–          PRAY: Prayer, through vibrant relationship with God, must lead everything we do. We need to hear from God and to obey both His Word and His Spirit. SLC has powerful prayer tools both within our training and through a daily prayer call (excepting Sundays): https://www.randrprayer.org/