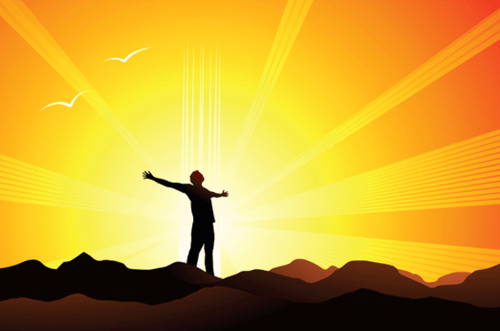 NOT JUST A WALK IN THE PARK

With all the street performers, and it being a busy weekend, I barely noticed this guy in the park working a booth promoting atheism. He was wearing one of those funny propeller beanie hats and looking kind of ridiculous. I just intended to keep walking, but a white board posing a question caught my eye: “Do you believe America was founded as a Christian nation?”

Okay, I took the bait. You see, it was the Saturday leading up to the 4th of July, and the “NOs” outnumbered the “YESes” about three to one—maybe more. I couldn’t just let that go by, you know what I mean?

There was quite a bit of action around the booth. Making my way through a small throng and asking for a marker, I stuck a resounding “Yes” in the proper column—when I noticed I was being videotaped by the man in the beanie. Not cool! He stopped, but we started to talk. Did I say, “talk”? He wanted to argue.

I told him God loved him. He said there is no God, and we were off and running. Long story short, the professed atheist asked if I wanted him to repeat the salvation prayer “for his 42nd time.” It hadn’t “taken,” obviously. An atheist-professing gal joined the discussion: two on one. Said she had a conservative Christian upbringing. No life-altering revelation had happened for her, either.

It hurt my heart that both confessed they had tried to know Christ and had not gotten anywhere. Both amazing people made in the image of God, and they couldn’t connect with their Creator. How could that happen?

At The Salt & Light Council, we seek not only for transformation of the culture; we care about personal transformation. Later, when I shared the conversation with some believers, one asked what hope there is for our country to move back to Judeo-Christian ethics. “Hope begins with each of us as individuals,” came a reply. “If we follow God and turn from our own wicked ways, God will hear from Heaven,” and—you know the drill. It’s true. It starts with us.

Back to my beanie-topped “friend.” For me, the propeller and the hat indicated confusion; like flies swirling around his head. It also made a mockery of faith. It looked silly. Another giveaway was his outfit’s rainbow colors that told me he was flying yet another flag.

Could it be his many professions of trust in Jesus had not led him to the Lord who loves him unconditionally, and created him with purpose, because he was holding onto something other than God? Or, that he tried, and tried, and tried, and didn’t know how to surrender what he thinks he cannot live without?

I’m not wanting to simplify the lifelong process of sanctification. Dying to self and putting on the new man is a daily choice; but in Christ, it is possible. It is a journey many have taken, and is worth it[1] —God says we are worth it![2]

Sexual orientation was clearly the elephant in the middle of the living room; or, in the middle of the concourse, in this case. The Bible is clear that homosexual practice is sin; right along with every other sin, but it is sin.[3] I didn’t bring it up. I wanted to stay focused on discussing the reality of God.

I felt compassion for the woman who expressed atheism in the face of being raised in a Christian home. What blocked her from falling deeply in love with Jesus? It’s scary. We are all a choice removed from walking towards or away from God—or believing that He truly exists.

God has given us the power to deny Him. Wow. Being salt and light is imperative. Remain quiet, and society forgets the Gospel message. Get enough people to deny Christ, and you have an atheist nation, which is where we are headed. Masses can drag culture into an abyss as well as upward into righteousness. At The Salt & Light Council, we say it’s God’s opinion that counts, not ours.

In rejecting our Creator, we leave His reality and conceive our own. If a man believes he was born homosexual, he lives in one reality. If a woman believes something else that is not Scriptural, she creates yet another reality. Do we realize when we walk down a boulevard that we are surrounded by realities? We don’t need science fiction to think them up—we do a perfectly good job on our own. In fact, if we are not in agreement with His truth, we can at any moment disagree with each other.

This is why our nation is in trouble. Because we are able, in the middle of a park, to walk up to a white board and blithely declare with a stroke of a pen that America was not founded as a Christian nation. In so doing we refute history. Fact be known, America has a covenant, a declaration, and a contract with God. It began in 1620, when the Pilgrims covenanted with God, declaring America a Christian nation through the Mayflower Compact.

Then, in 1776 the Declaration of Independence—our declaration—followed, saying it’s self-evident we are endowed by whom? By our Creator with life, liberty and the pursuit of happiness—known, at that time, as synonymous with virtue; whose virtue? God’s.

And, in 1787 the Constitution of the United States of America became our contract with God—bestowing the blessings of liberty not just to those living at the time, but to ourselves and our posterity. Who but God can confer blessings; especially through the ages?

The conversation ended when atheist-professing guy reverted to cursing. I would like to believe the swearing started because something I said threatened his defense against God. I pray some salt and light began to pierce the confusion and shatter the darkness of unbelief.

As I walked away, I heard him justify himself to the woman, saying I kept jumping from subject to subject. True, I did. But, everything I shared had one thing in common. It was based on the same reality—God’s. And so I left him, propeller-beanie and all, spinning in the wind.

But you have not so learned Christ, if indeed you have heard Him and have been taught by Him, as the truth is in Jesus: that you put off, concerning your former conduct, the old man which grows corrupt according to the deceitful lusts, and be renewed in the spirit of your mind, and that you put on the new man which was created according to God, in true righteousness and holiness (Ephesians 4:17-24).

[2] For God so loved the world that He gave His only begotten Son, that whoever believes in Him should not perish but have everlasting life (John 3:16).

[3] Restored Hope Network is a referral source for those struggling with sexual and relational brokenness and for their friends and family members: https://www.restoredhopenetwork.com/